I have to say, next to Christmas, Halloween is my favorite holiday. Having a Druid as a character in my head for over 13 years might have something to do with it, but honestly, I’ve always loved this holiday. I dress up every year – in some small way. Lately, I’ve been the Wicked Witch of the East before the house dropped on her. Because sparkly red (or silver – depends on if I’m channelling the book or the movie) shoes are one of the happiest things on earth.

This year, because it’s a Friday, and we have leave to wear jeans (I NEVER give up the opportunity to wear jeans at work), I’m going as a lumberjack.

And because I’ve had this song in my head for days:

Right. So. Halloween. (I swear to the gods, D is groaning in the far corners of my brain. Like painfully. Sometimes torture is fun). Once the sugar-high has subsided, The Boy and I will be capping our month-long scary/Halloween movie extravaganza with the film that inspired it: The Shining. I’ve seen it once, and it’s a slow, creepy burn that still gives me the shudders, but I’m looking forward to seeing how he reacts. This marathon of sorts has been an eye-opener into how the kid’s brain works, and how he perceives things. It’s been amazing. 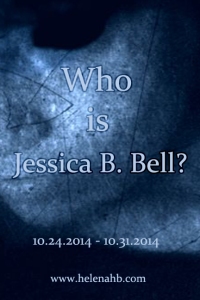 And second on my Halloween to-dos, did you know there is this fabulously creepy and just plain wonderful serial going on over at casa de Basquiat? You need to check it out, because it is just the best compilation of writing I’ve read in a long time.

Part Eight is going live today. If you do anything today, check it out. I mean it. And go follow Jessica B. Bell on Twitter, because there is something amazing going down on Saturday, and something tells me you’re going to want to be in on it from the start.

And finally, the reason I started this post in the first place – no, not to bombard you with my crowdfunding campaign (although if you haven’t pre-ordered Changelings, please feel free to click the link and do so now!), I had intended to write up a (softly) scary story for Halloween, but then the proofs for Changelings came in and – horror-of-horrors – I found even more typos (it just never ends), so that has been consuming my life for the last several days. Instead of making myself crazy (D: crazier), I decided to repost a story I wrote for a prompt at the Community Storyboard two summers ago. Headless is one of my favorite pieces of writing, and I hope you enjoy it, too.

Izzie Crane was just this side of miserable. Tarrytown was a sleepy little place. She’d wanted some peace and quiet after divorcing Bob, sure, but this was ridiculous.

Oh well. Her contract at the school was only for a year, and there was no reason to expect that it would be renewed. As much as she disliked the town, so too did the town dislike her.

Well, maybe not all of them. Kat Van Tassel was good fun to hang around with – and the tales that woman could spin! If the upright matrons of this town only knew what their darling really thought of them. . .

She and Kat met for coffee every Thursday. Kat would give her the latest town gossip and a history lesson on the town that beat anything in Izzie’s textbooks. Sometimes Kat regaled her with recent history – dirt on the parents who seemed to live to make Izzie’s day a nightmare. Other times, the stories Kat told were practically ancient.

The Revolutionary War featured heavily in this area of the state and the way Kat told it, nearly every man who fell in that war had taken up residence in a forested hollow just outside Tarrytown. Izzie loved that spot, and she felt lucky that her small rented cottage was on the other side of it. Besides, the old covered bridge seemed like a lovely place for a romantic stroll, and she told Kat so.

“Sure, you say that now,” Kat laughed. “But just imagine walking home – after midnight, of course – and being stuck in that covered bridge, hemmed in by the restless dead. I haven’t even told you about the Headless Horseman, yet.”

Izzie rolled her eyes. “Kat, everyone has heard of the Headless Horseman. Wasn’t he some Hessian soldier who lost his head to a cannon ball?” She lowered her voice until it was just a whisper. “He roams the night looking for his head and woe to those who stand in his way!”

Kat laughed. “You tell a good story there, Ms. Crane, but I wouldn’t scoff at the undead. The Hessian still hasn’t found his head, and I certainly wouldn’t want to be the one he fancied.”

Izzie grinned. Kat wasn’t going to give it up, but was part of her charm. It certainly made for entertaining company every Thursday. And, her stories helped Izzie get into the spirit of the holidays.

Halloween was just around the corner. Kat and her boyfriend, Brom, were throwing a costume party, and in an effort to help the town accept Ms. Crane, Izzie was the guest of honor. It was Kat’s idea, of course. Brom had all-but spearheaded the effort to make Izzie’s year of teaching a misery. But, he was devoted to Kat, so when he answered the door to Izzie’s cloaked form, he plastered a smile on his face and let her in.

She hefted the grimacing pumpkin in her hands and thanked him. He waved her off to the kitchen, where Kat was putting appetizers on a tray.

“Izzie – what are you wearing?”

“I found the horseman’s head,” Izzie said through the cloak she’d rigged to cover her head. She lifted the lid off the pumpkin and pulled out the bottle of wine she’d stored there. “For my hostess.”

Kat shook her head and grinned. “So much for me trying to show you off tonight, Izzie. No one can see you.”

“But think of it this way, Kat – maybe they’ll consider it an honor. Besides, I’m not looking for dates, just a good time.”

“Well, then we’ll have it. Come on, I think I heard the doorbell. Let’s relieve Brom on door duty. I think you should greet the guests.”

Several hours – and glasses of wine – later, the guests were starting to leave. Izzie had delighted Kat by participating in their ghostly tales and revelry. The only one who didn’t seem impressed was Brom, who was now glowering at her from the bar.

Izzie couldn’t decide if he was jealous of her friendship with Kat, or if he was just a bad-tempered grump who disliked outsiders. Regardless, she paid him no mind as she bid her hostess goodbye.

“Be careful, Izzie. Are you sure you won’t let me drive you home?”

“You have had far too many glasses for me to even consider letting you drive me home. Besides, I have the pumpkin. He’ll scare off any ghouls – human or otherwise.”

Kat giggled and waved her off.

The night was cool but Izzie was comfortable in her cloak. The pumpkin was starting to get heavy in her arms, but she wanted it for her cottage. Besides, it was a talisman of sorts, and as the bridge neared, she irrationally felt it might protect her. It was after midnight.

She was happily recounting the night in her head and didn’t hear the sound of hooves on the pavement until a waft of heated air lifted the hem of her cloak. Dead leaves swirled at her ankles.

Izzie turned and nearly dropped the pumpkin. The black horse snorted inches from her face. She slowly, reluctantly, allowed her eyes to travel up the horse’s snout to its rider. He was caped, like she, and headless, too. However, the rider was not holding himself still with terror, like she. The tilt of his shoulders seemed confused. He appeared to be regarding her, wondering.

Izzie lifted up the pumpkin.

“A head for you?” she asked. Her voice quavered.

The rider urged his horse forward a few steps. He leaned down. The stench of brimstone made Izzie wrinkle her nose. She closed her eyes tight. She couldn’t outrun a horse, certainly not one with a rider such as this.

The horseman lifted the pumpkin from her hands. She opened her eyes, surprised, and peered out of the gap in her cloak. She watched with fascinated horror as he settled the jack o’lantern on his headless neck and roll his shoulders, as if adjusting the fit. She nearly fainted when the pumpkin-head turned and looked down at her.

“My thanks. It will do for tonight. May I give you a ride home?”

Izzie stared at the hand reaching down, offering to help her onto the horse. She wondered what he would do if she refused. Hell, what would he do if she agreed? She did notice though, that the smell of sulfur was beginning to wane. And his manner had been nice enough. Maybe all the horseman needed was a head . . .

She took his hand. Hadn’t she been complaining to Kat just the other day that nothing exciting happened in Tarrytown?

Other Books by Katie Sullivan